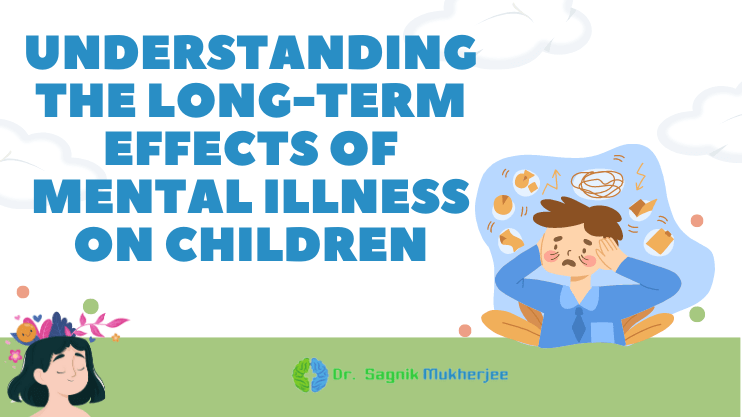 Examining the Lasting Consequences of Mental Illness in Children

Mental illness is a broad term used to describe a variety of mental health conditions, including depression, generalised anxiety disorders, and psychosis. While most people tend to think of adults when it comes to mental health issues, mental disorders can affect children as well. In fact, according to the World Health Organization, between 7-20% of children and adolescents worldwide suffer from some form of mental disorder. It is important to understand the long-term effects of childhood mental health issues in children so that we can be identified early and treat them effectively.

The types of mental health conditions and emotional disorders which appear in childhood vary greatly and can include attention deficit hyperactivity disorder (ADHD), autism spectrum disorder (ASD), bipolar disorder, post-traumatic stress disorder (PTSD), depression, obsessive-compulsive disorder (OCD), social anxiety disorder, and psychotic disorders such as schizophrenia and dissociative identity disorder. Risk factors may be traumatic events, stressful life events, or related to the child’s medical conditions and medical history. Each type has its own unique set of mental and physical symptoms that require a wide range of different treatments. Parents need to be aware of the signs and negative symptoms associated with each type so they can identify them early on if needed

Childhood mental illness can have a significant impact on behaviour. Psychotic symptoms such as restlessness, irritability, difficulty concentrating, impulsivity, defiance, or aggression may arise due to an underlying mental health issue. In some cases, this can lead to behavioural problems at home or school which can be challenging for parents and guardians to manage. In addition, children with emotional disorders may also experience changes in their sleep patterns or appetite levels as well as low self-esteem and feelings of guilt or shame

Mental health disorders can have a significant impact on a child’s physical, behavioural, academic, and social development. Behavioural problems may manifest themselves in the form of aggression or acting out behaviours such as fighting or lying. Academic difficulties may include stressful life events like poor performance in school due to difficulty focusing or concentrating on tasks due to underlying mental health issues. Isolation may also occur as a result of poor social skills or lack of interest in interacting with others due to negative self-esteem or low self-confidence caused by mental health disorders and depressive disorders. Additionally, some studies have found that children with untreated psychiatric disorders are at an increased risk for developing physical health problems such as obesity and diabetes later in life.

Mental disorders can lead to several academic challenges for the health of children such as difficulty concentrating or remembering information; poor organisational skills; lack of motivation; avoidance of school activities; difficulty completing assignments; missed deadlines; poor test scores; negative interactions with teachers; and general underachievement. Environmental factors may also play a part here. Left untreated, these mental health issues can worsen over time which can result in additional academic difficulties down the line.

Finally, childhood mental health problems can lead to social isolation. Symptoms such as social withdrawal or avoidance may cause them to become disconnected from family members or peers at school. This can lead to further feelings of loneliness and disconnection which can have a devastating effect on the kid’s mental health. For example, research has shown that social isolation increases the risk of depression and depressive disorders later on in daily life.

Parents need to recognise the signs and psychotic symptoms associated with any potential psychiatric disorders their child may be experiencing so that they can seek help early on if necessary. Parents should also make sure their kid’s physical conditions and needs are taken care of by providing them with healthy meals and ensuring adequate restful sleep every night as both good nutrition and sleep play an important role in maintaining optimal physical health which is key for managing overall well-being. Additionally, parents should provide emotional support by listening without judgement when their children talk about their feelings or concerns this will help them feel heard and understood during difficult times which can go a long way towards helping manage any underlying psychological issues or mental health problems they may be experiencing. Finally, parents need to get professional help if needed through therapy sessions or medication prescribed by a doctor or psychiatrist who specialises in treating children with mental disorders.

Treatment for Mental Illness in Children

Mental health issues such as depression, anxiety disorders, bipolar disorder, panic disorder, and other forms of psychological distress are not just exclusive to adults; they can affect children too! Parents need to recognise the signs and symptoms associated with any potential mental health problems their child may be experiencing, whether it’s attention deficit hyperactivity disorder or dissociative disorders.

This way, they can seek help early on if necessary from professionals such as psychiatrists who specialise in treating kids with these types of issues. With proper treatment along with emotional support from family members, children suffering from emotional disorders or depressive episodes can go on to lead happy fulfilling lives despite their struggles! If you’re looking for reliable psychiatric services in Kolkata for your child then consider booking an appointment today with Dr. Sagnik Mukherjee at his clinic located at 19x/1 Dum Dum Road in Kolkata, West Bengal. Call +91 98313 13020 for help with mental disorders or arrange online consultations upon request!